Simple dishes cooked from quality, unprocessed ingredients should be the basis of menus from schools to prisons, was the message to those attending the Public Sector Catering Expo.

At the heart of catering across the public sector – from schools to universities, hospitals, care homes, the armed forces and prisons – lies the simple idea that the best meals are prepared using good quality ingredients that have had the minimum of processing.

That was the message that came through load and clear from the two keynote speakers who addressed the inaugural Public Sector Catering Expo in Telford from November 19-20 – sustainability campaigner and celebrity chef Hugh Fearnley-Whittingstall and Bake Off’s Prue Leith, a long-time champion of better food in schools and hospitals. 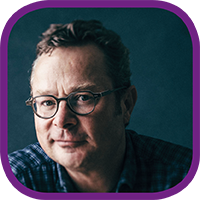 Hugh told his audience that there was a lot of excitement around food right now. He urged public sector caterers to reclaim the story of the ingredients they used and to tell to this to the people they served.

“We, as chefs, want our food to arrive whole and then we use our creativity. We don’t want over-processed food with lots of additives, because working from whole foods provides better flavour more job satisfaction and it’s more nutritious.

“A connection to food is crucially important, rather than anonymised produce, and the story of the food helps us engage better.

“And by whole foods, I don’t mean just brown rice and lentils, it includes frozen peas, tinned beans, slices of meat – products that are recognisable.

“The healthiest foods are whole foods and our menus should be based on these. We need to major our diets around whole fruit and vegetables and pulses – it’s good for us and it’s good for the planet.

“The plant kingdom provides the widest palettes of taste, colour and texture for chefs to work with. And the focus on whole foods helps bring together the key issues of our health and environmental sustainability.”

On the issue of plastics, he said the emphasis should be on reducing our reliance on them and re-using them where we can.

“It is possible to operate a kitchen without clingfilm, for instance. We’ve tried it at River Cottage and made it work, and it was difficult at first, but by using re-usable containers we’ve managed it.” 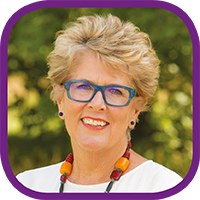 Speaking on day two of the Expo, she discussed how important food was for everyone in the country, from school children to prisoners, to military personnel, and patients in hospitals.

She said: “It’s in the interests of government to get its citizens as healthy as possible. This cannot be achieved without making food and diet a priority.

"Wouldn't it be better, and easier, to make healthy eating part of the curriculum, provide free healthy school meals as a lesson, albeit a relaxed and happy one, where children are taught to eat well as well as learning about sustainability and food politics?

“The sad fact is that governments tinker with food education, depending on who the secretary of state is and what the headlines in the Daily Mail are. But no one has the guts to really grasp the nettle and do something radical.”

Touching on the subject of climate change, she emphasised that future generations could do more.

"My generation has not served the planet well. If we want the next generation to do better, we could start by feeding them healthy, ethically-sourced and sustainable food, and teaching them to love it.”

She praised caterers across the public sector and what they could do with the limited budgets they worked with.

“I know very little about prison food, but I do know that it is impossible to feed anyone with food healthy food, locally sourced and sustainable with a budget of £2.02 a day to include three meals and drinks. I know the caterers try really had to do well by their charges.”

Speaking on the recently launched government hospital food review, to which she has been appointed an adviser, she said that they were 'about halfway through', and expected to have it ready by the end of the year.

She admitted that she initially turned down the chance to be involved, but after speaking to health secretary Matt Hancock she said she had been encouraged by his passion.

“I was persuaded by secretary of state, Matt Hancock, whom I believe to be a really good guy, pinning his own reputation on the success of reforms to the NHS.”

After a further meeting with prime minister, who said 'all the right things', she said that despite the current looming general election and political uncertainty, she was 'determined that the review will not be pushed into nowhere’.

She added: “However technically nutritious a plate of food is, there’s no benefit to the patient if it goes in the bin.

“The intention of the review is to improve, not just the nutritional value of hospital food but also to make it delicious and sustainable, and to ensure that cooking, as far as possible, takes place as close as possible to the end customer.”

She ended with a personal plea: “We all know how important good food is, not only to health, but to morale. Cooking can be a joy. Food should be a pleasure. We are in a great industry, and we should be proud of it. But we do all need to bend our efforts towards the best, and not ever be satisfied with junk.”

Founder of Love British Food and Drink and British Food Fortnight, Alexia Robinson, told caterers why buying British was the right choice for the public sector.

She said the annual fortnight encouraged caterers responsible for sourcing food in schools, hospitals and across the public sector, ‘to buy more British, and promote the British produce they already use on their menus’.

“The aim is that we want British food to be the first supplier of choice across the sector.”

Cutting food waste was the theme taken up by Amy Fetzer from the Waste and Resources Association Programme (WRAP), who addressed caterers about how its Guardians of Grub programme could help public sector caterers.

She said: “Food waste sits within a perfect storm of other pressures,” which is why businesses are slow in taking steps to reduce it, but the success stories she shared showed savings of hundreds of pounds.”

According to WRAP, 75% of food waste is avoidable and it currently costs the UK £2.9bn per year.

“The Guardians of Grub campaign aims to empower the whole hospitality and foodservice sector to make a start on reducing food waste.” 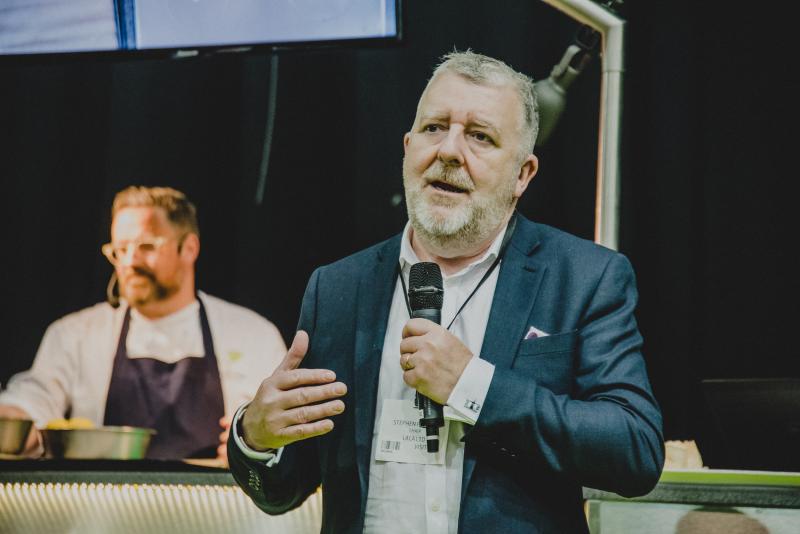 The hospitality industry’s endemic labour shortages were the focus of a panel debate led by PSC100 Group chair Andy Jones.

Dave Oliver, head of prison catering, said: “We do have major issues recruiting staff into the prison catering service, the pay we can offer is just not competitive enough, particularly in the south east and London.”

Stephen Forster, chair of LACA, pointed out schools had been lucky in that traditionally the catering services drew on the mothers of school children who were looking for part-time work that fitted around school hours.

However, he said the National Minimum Wage and the Living Wage had put pressure on budgets that had not risen to meet this increased call on funding.

Anne Dudley, speaking on behalf of the NACC, said it was struggle to recruit anyone into the care sector. She said that more was being asked of chefs but the respect and prestige of working in the care sector had not risen.

And Matthew White, for TUCO, said universities were fortunate in that they had a ready pool of labour to draw on in the students themselves.

Stewart McKenzie for the HCA said: “We have de-skilled many kitchens in the NHS and not done enough succession planning at a management level.”

Jayne Jones, for ASSIST fm, said that in Scotland there were moves to actually expand meal services to provide food to young children outside of term time, so creating demand for more staff.

One source of future staffing for public sector catering are the thousands of students enrolled in colleges of further education. 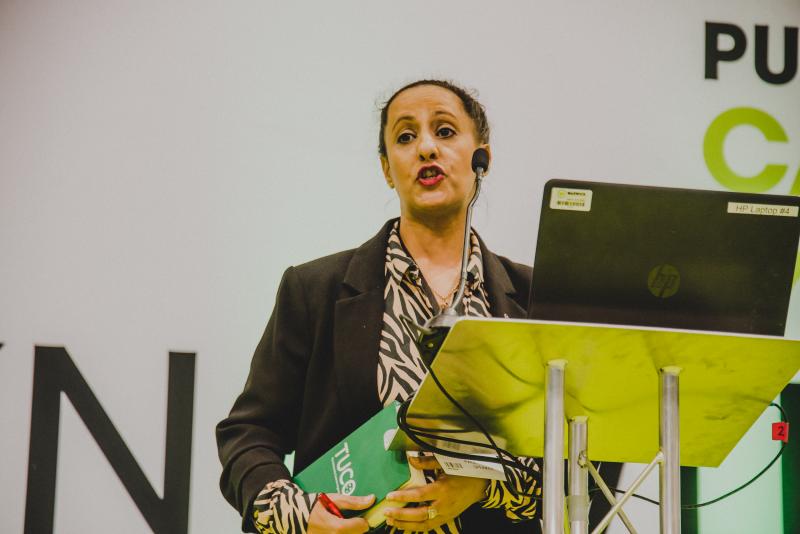 Molly Shaher for PACE (Professional Association of Catering Edication) felt that parents were actively steering their children away from hospitality because they did not perceive it to have a good image.

And she said that work experience opportunities for catering students were very limited because of the need for employers to run risk assessments.

She said there were declining numbers of students in colleges of FE and as a result some colleges had been combined.

“Some catering courses have closed because they are expensive to run. The FE sector suffers from a lack of funding – one of our courses gets only about a tenth of the money a university course attracts.”

Matt White added that public sector catering was a ‘hidden gem’ and the industry did not do enough to promote it as a career, particularly apprenticeships.

“We are missing a trick a bit here. We don’t do enough on social media and using video clips to help promote a positive image of the industry.”

The panel members all agreed that it was important that caterers in the public sector made the time to allow college students and even pupils at school to visit and see what they did to start to attract more workers in future.

Dave Oliver added that apprenticeships were starting to be introduced into some prisons. “It’s an exciting opportunity, but there’s also a bit of reluctance to spend time and money training people who then leave,” he said.

The increased interest in plant-based menus was the cue for Charlie Huson of Humane Society International to highlighted the benefits of such a change in diet in helping to curb the impact of livestock farming on the environment and to improve public health. 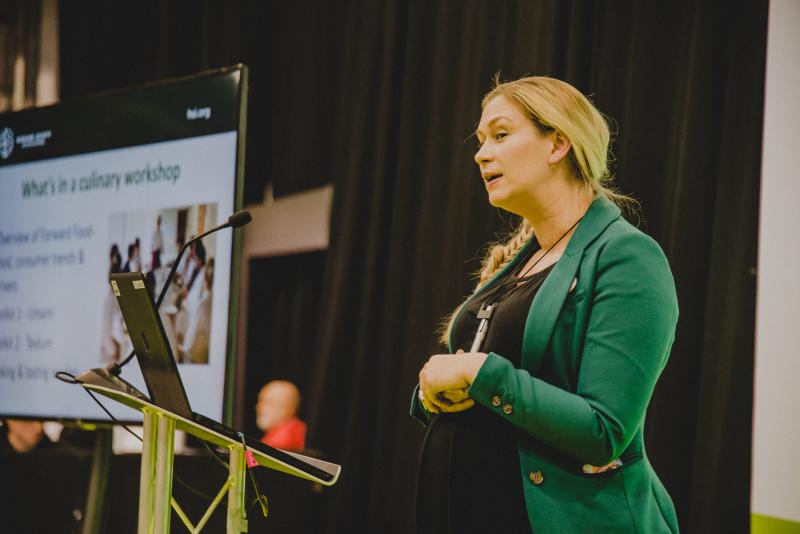 She said that meat and fish were usually the ‘star’ of a dish, but she wanted to change this perception and encourage more of a plant-based diet to ‘get people excited about this kind of food’.

She encouraged chefs to tailor their menu options by substituting meat for plant-based ingredients, to ‘rebalance their dishes’ and to offer plant-based specials.

She pointed out there were 80bn farm animals and livestock farming used 83% of agricultural land to produce just 18% of calories grown each year.

“A plant-based diet offers a more sustainable approach,” she said.

The Public Sector Catering Expo 2020 will take place at the NEC Birmingham on 17-18 November.